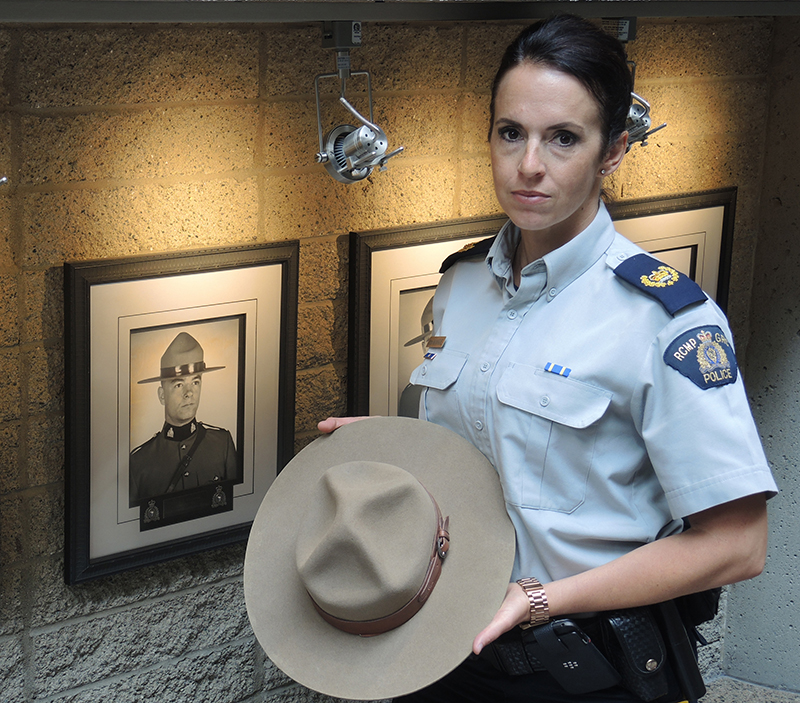 When Tim Jöckel came across an RCMP Stetson for sale at a flea market in Hamburg, Germany, he was thrilled. As an avid collector of RCMP memorabilia, Tim had long been in search of an original John B. Stetson to add to his collection.

To help verify the authenticity of the iconic RCMP hat, Tim sent photos of the Stetson and the regimental number etched on the inside #27160, to his Canadian friend and RCMP veteran, retired Superintendent Ric Hall.

Ric discovered that the regimental number belonged to Constable Terry Draginda, a young Surrey RCMP officer who was killed in a motor vehicle collision while on duty on September 29, 1974. Ric reached out to Surrey RCMP’s Staff Sergeant Major Beth McAndie, with the hopes that a trade could be arranged for the Stetson.

For Staff Sergeant Major McAndie, preserving the history and the memory of fallen officers is of the utmost importance.

I knew when I heard about Draginda’s Stetson that it belonged here at Surrey Detachment, explains McAndie. Constable Draginda was only 24 years old when he lost his life on duty, we must always remember and honour his service in every way we can.

It’s a sentiment Tim Jöckel could relate to, as a former police officer who had also lost colleagues on duty. Tim graciously agreed to trade Draginda’s Stetson for a similar one Staff Sergeant Major McAndie had collected years ago.

We’re very grateful to Mr. Jöckel, not only for locating the Stetson, but also for sending it home to Surrey Detachment, explains Staff Sergeant Major McAndie. It means a great deal to me, and to the men and women who serve, that our fallen officers are remembered and honoured.