Surrey RCMP is advising the public of a recent arrest of a prolific offender who fled from police and was located with the help of a police dog.

After initiating a traffic stop of a vehicle in the 6400 block of 121 Street, the vehicle sped off at a high rate of speed. Officers were able to deploy a spike belt to quickly stop the vehicle.

With assistance from the Lower Mainland Integrated Police Dog Services (IPDS), a male suspect was located and taken into custody. A search of the male and vehicle revealed two replica handguns and bear spray. Police also discovered modifications to the vehicle that appeared to mimic police vehicle emergency lights.

On September 4, 2022, 29-year-old Justin Mercieca was charged with multiple offences including: flight from police, dangerous operation of motor vehicle, three counts of possession of a weapon for dangerous purpose, possession of an identity document that relates or purports to another person, and driving while prohibited under the Motor Vehicle Act. He remains in custody awaiting his next court appearance. 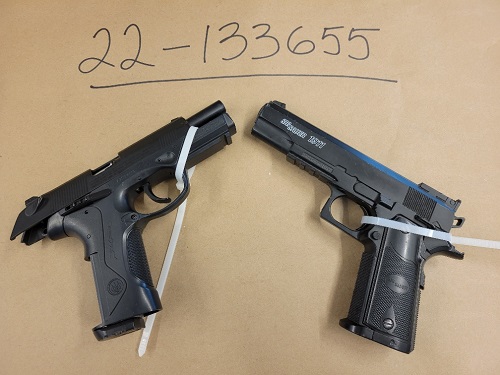 Gang enforcement officers from Surrey and CFSEU-BC are out conducting roving patrols, targeting dangerous offenders and those involved in criminal activity like Justin Mercieca, who put the safety of other’s at risk in our community, says Surrey RCMP Media Relations Officer, Cst. Sarbjit K. Sangha.