Drugs and guns seized as part of targeted gang enforcement

Multiple firearms and pre-packaged drugs were recently seized by the Surrey Gang Enforcement Team (SGET) during a vehicle stop in Newton, as the Surrey RCMP continues to target individuals associated with gang and drug trafficking activity.

Shortly after 11:30 p.m. on April 17, 2021, SGET conducted a traffic stop with a vehicle in the area of Woodland Place and 99 Avenue. During their interactions with the driver, the officer observed a weapon inside the vehicle and subsequently detained the driver for weapons possession.

Further investigation of the vehicle led to the discovery and seizure of several other weapons including a 12 gauge shotgun, 22 caliber semi-automatic rifle, starter pistol, firearms ammunition, and two knives. 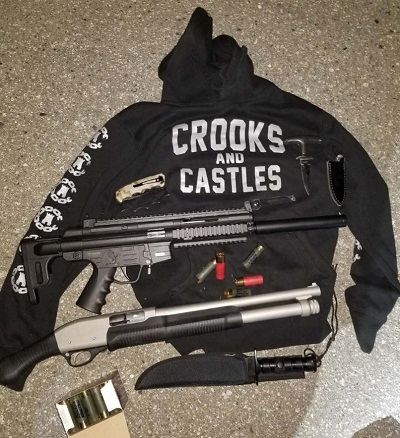 The driver was arrested for possession for the purpose of trafficking, and later released. Charges have not yet been laid as the investigation is on-going.

The SGET continues to be engaged in an aggressive plan to target criminals who put our community at risk. The SGET officers have direct contact with gang members and affiliates in Surrey, through increased curfew checks as well as continued targeted enforcement and vehicle interdictions.

Targeted enforcement by the SGET prioritizes those individuals who pose the highest risk to public safety because of their actions, affiliations, involvement with gangs, and drug trafficking throughout the Lower Mainland.