Two significant seizures of drugs and a firearm were made by Surrey RCMP in one night, as a result of proactive and targeted enforcement.

Shortly after 7:30 p.m. on November 20, 2020, a member of the Surrey RCMP Community Response Unit (CRU) was conducting targeted enforcement when they stopped a vehicle near 109 Avenue and 139A Street. The vehicle was driven by a man who was prohibited from driving and had two outstanding arrest warrants for driving while prohibited, for which the man was arrested.

Through further investigation, officers located plastic bags containing smaller packages of suspected drugs, approximately $2,000 cash, two cans of bear spray, and other items consistent with drug trafficking. The man, and the vehicle passenger, were both subsequently arrested for possession for the purpose of trafficking. 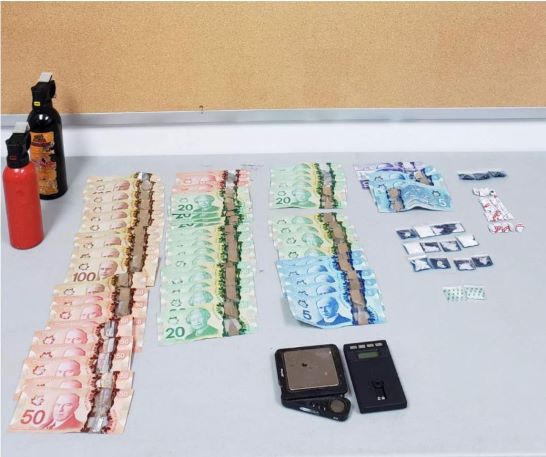 Later that night, shortly after 10:00 p.m., a frontline officer came across a parked running vehicle, in the 10500-block of King George Boulevard, where the driver was passed out behind the wheel. The officer woke the driver and began an impaired driving investigation which led to the man’s arrest.

Both investigations are ongoing and no charges have been laid at this time.