Surrey RCMP is proud to share that 25 Surrey RCMP officers have been named to Alexa’s Team for 2019.

Alexa’s Team was launched in 2008 in tribute to four-year-old Alexa Middelar whose life was tragically taken by a drunk driver. Each year, Alexa’s Team recognizes police officers in B.C. who demonstrate extraordinary efforts in removing impaired drivers from B.C. roads.

This year, 25 Surrey RCMP officers will be recognized by Alexa’s Team for their fight against impaired drivers for the year of 2019. Constable Mark Goh of Surrey RCMP Traffic Services made the top of the list with 53 impaired driving investigations. 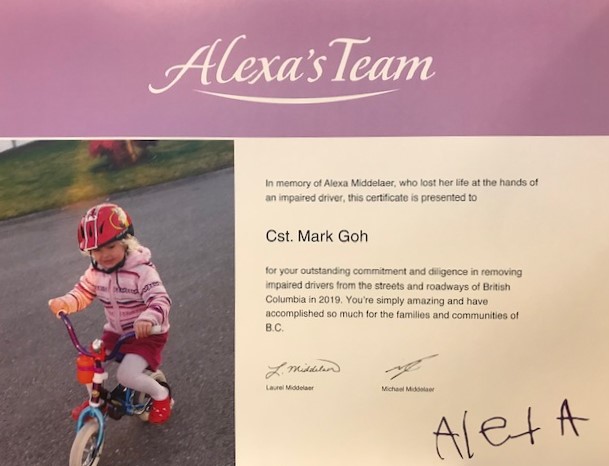 Targeted enforcement of dangerous driving behavior such as drunk driving has an immediate impact on public safety, says Superintendent Aaron Paradis, Surrey RCMP Community Services Officer. We’re pleased with the hard work and commitment of officers across British Columbia who are dedicated to keeping our roads safe.

Surrey RCMP typically sees an increase in impaired driving cases around the holidays and is cautioning individuals to re-think their decision when getting behind the wheel after consuming drugs or alcohol. B.C has some of the toughest impaired driving laws where penalties range from driving suspensions and vehicle impoundments to serious fines and criminal charges.

Anyone who witnesses a suspected impaired driver, is asked to pull over safely and contact 9-1-1 immediately.