A traffic stop by Surrey RCMP frontline officers leads to the seizure of a large quantity of suspected psilocybin mushrooms in Guildford.

On October 25, 2020, Surrey RCMP frontline officers were conducting speed enforcement in the area of 96 Avenue and 166 Street when they encountered a vehicle traveling 108 km/hr in a 60 zone.

As the investigation unfolded, officers observed items consistent with illicit drug possession and arrested the driver.

Further investigation resulted in the seizure of a number of items consistent with drug trafficking, along with two small bags of suspected marijuana, and approximately 451 grams of psilocybin, or magic mushrooms. 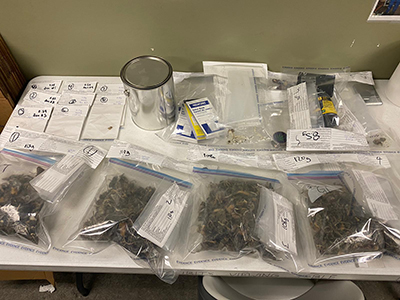 The driver of the vehicle was issued a driving prohibition and their vehicle was impounded for seven days. They were issued violation tickets for excessive speeding, failing to provide driver’s license and failing to display N sign. The driver was released at the scene. Charges have not yet been laid in relation to the drug possession; the investigation is on-going.

Targeted speed enforcement has an immediate impact on road safety in our community by stopping dangerous drivers in their tracks, says Cpl Joanie Sidhu, Media Relations Officer for the Surrey RCMP. The true magic results when officers are also able to take illicit drugs off our streets.

Collisions involving speed is one of the leading causes of fatalities on B.C. roads. You can prevent or reduce the effects of vehicle impact by maintaining a safe driving speed. It is common sense advice – but just slowing down could save your life, or someone else’s.