May is High Risk Driving month in BC

The month of May marks the beginning of increased traffic on British Columbia roadways and, with more road users, the potential for an increase in collisions. To save lives, May is identified as High Risk Driving month and police across BC are conducting enhanced enforcement to educate the driving public and target high risk driving behaviours.

High-risk driving behaviours include, but are not limited to:

According to provincial statistics, an average of 114* people die in collisions every year in British Columbia where high risk driving was a contributing factor. Injuries and death that result from high-risk driving behaviours can be prevented, and it all starts with the person behind the wheel. 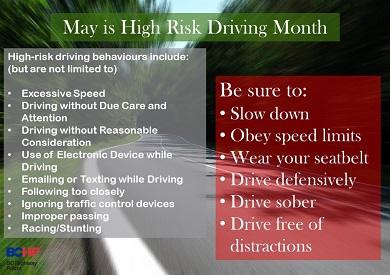 Driving is a complex, divided attention task and there are several easy things drivers can do to reduce risk to themselves, their families and other motorists, says Chief Superintendent Holly Turton, Officer in Charge of BC Highway Patrol. First, slow down, obey speed limits, wear your seatbelt, drive defensively, drive sober and free of distractions. By following these simple rules, we are making our highways safer together.

The entire month of May is dedicated to this campaign and includes the one-day National Impaired Driving Enforcement Day held on May 21, 2022.

Driving is a privilege and BC is a leader when it comes to holding drivers accountable for their actions. Motorists can expect to see enhanced enforcement throughout the province during the month of May and beyond.