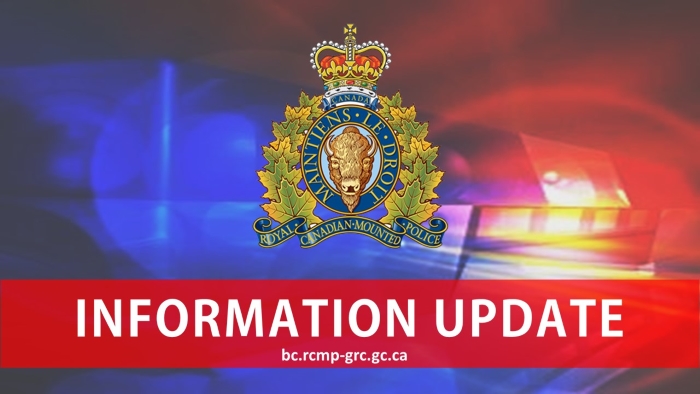 A rare public notification and plea for vigilance by the RCMP surrounding a suspected police impersonation incident on March 21, 2021 in the Boundary region, led to 4 additional motorists coming forward with encounters outside of Lumby just a week prior. A fulsome review of each of those incidents has allowed GIS investigators to confirm those contacts were in fact carried out by a uniformed police officer.

Investigators with the Vernon North Okanagan Rural RCMP General Investigation Section (GIS), supported by the Southeast District GIS conducted a probe into the four reported incidents in the Lumby BC area. That review has revealed that each of those traffic stops were in fact carried out by a provincial traffic enforcement officer with the BC RCMP North Okanagan Traffic Services (NOTS), a roving traffic enforcement unit, based in Falkland. The police officer was on-duty, dressed in full uniform and operating a fully equipped unmarked white Chevrolet Tahoe.

A complete review of the traffic enforcement officer’s electronic database police records, combined with in-car video system footage has provided confirmation that the four reported traffic stops in the Lumby area in mid-March were conducted by the highway patrol officer, states Insp. Jeff Dowling, Officer-In-Charge of BC RCMP Traffic Services in the Southeast District. We have since updated our four civilian complainants from the Lumby area of the investigative findings to date. We wish to thank each of them for coming forward with their information, in order to aid in our ongoing investigation.

The impersonation of a police officer is a somewhat rare occurrence. If you suspect someone may be using or is planning to use real or replica police equipment, clothing or memorabilia to commit a crime, please report it to your local police or Crime Stoppers, states Cpl. Jesse O’Donaghey, spokesperson for the BC RCMP in the Southeast District.

We care deeply about the communities we serve and we are committed to sharing timely information in order to preserve public safety. We are now assessing our processes to see if there is any way we can help reduce public uncertainty, adds Cpl. O’Donaghey.

The investigation into the suspect police impersonator case in the Boundary region continues to be handled by the Midway RCMP, with oversight from the Southeast District GIS team. If members of the public notice anything suspicious, or is anything seems off, they are encouraged to call their local police or 9-1-1.