Cryptocurrency fraud on the rise in Canada, don't fall victim!

Fraud is big business for organized crime around the world, and criminals are always exploiting new ways to take your money. Cryptocurrency fraud is increasing dramatically in Canada with a difference of more than 400% between 2017 and 2020. In the first eight months of 2020, Canadians lost nearly $11 million through digital currency scams alone, second only to wire transfer fraud. A few short years ago, reports of frauds involving cryptocurrencies numbered in the hundreds (734 in 2017) and now they are over ten times that amount (7,598 for the first 8 months of 2020).

Cryptocurrency, commonly known as Bitcoin due to being the first to be decentralized, is a digital asset used as a medium of exchange but only exists in a secure database. It is called cryptocurrency because it uses strong encryption to secure transaction records and verify transfer of coin ownership. This makes the transfer of coins virtually untraceable and provides fraudsters with protection and anonymity from their victims. Scammers can also access the coins from anywhere in the world which further hampers their prosecution, even if they could be identified.

Scammers tend to use similar tactics to rid you of your money regardless of the method they use for the actual transfer of funds. They will often pressure the target, or threaten with extortion or violence, in order to get them to pay quickly. They will often identify themselves as a government official or police officer to increase the level of jeopardy if immediate action is not taken by the target to pay. Spoofing their number to show up as local police, or a government agency, is common and helps to convince the target that the caller is legitimate. Scammers often target victims of fraud a second or third time with the promise of recovering money. Unfortunately, the money may never be recovered and any further funds sent to them could also be lost.

Even if you don't normally use cryptocurrency, the scammer can direct you to an ATM where an exchange can be made. Once the coins are in the scammer’s wallet, the victim’s money is gone and unlikely to be retrieved.

It is important to understand that Canadian government agencies or police DO NOT demand payment through the exchange of cryptocurrency, says Sergeant Raju Mitra, of the BC RCMP Federal Policing Prevention and Engagement (FPPE). Also, even urgent demands by legitimate agencies will provide convenient, secure options and reasonable time to pay.

BC RCMP FPPE, in collaboration with National RCMP FPPE, Surrey RCMP Economic Crime Unit and the BC RCMP Digital Forensic Unit, are placing bold stickers and posters on or near cryptocurrency ATMs in BC in an attempt to prevent scam victims from losing their money in this way. 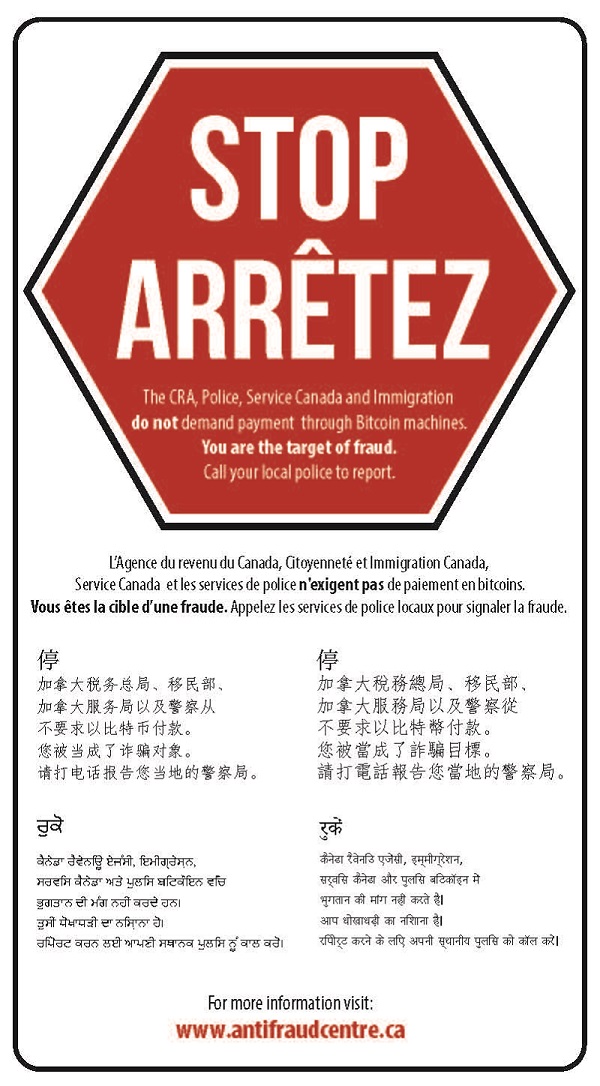 In order to protect yourself from scams, never give out your personal information especially to an unsolicited caller. Also, don’t be afraid to say no to the caller if they ask you to send them money or require up-front fees to receive a prize or gift. Finally, always verify that the organization you’re dealing with is legitimate before you take any action.

For more information on scams, and additional ways to protect your money, go to the Canadian Anti-Fraud Centre website at www.antifraudcentre-centreantifraude.ca