Lytton RCMP shows its support for the 2SLGBTQ+

Lytton, B.C. Southeast District, This Is What We Do

The crosswalk at Fourth and Main in Lytton is looking a lot more colourful these days. 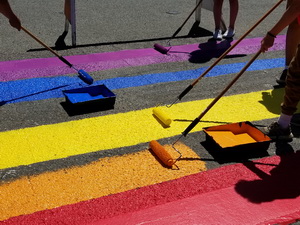 Lytton RCMP Detachment Commander, Sergeant Curtis Davis wanted to show the detachment’s support of the 2SLGBTQ+ community during Pride Month. Several weeks ago, he approached the Chief Administrative Officer of the town and pitched the idea of a rainbow crosswalk to the Village of Lytton.  The proposal was met with immediate support and passed at the June 12 Council meeting. 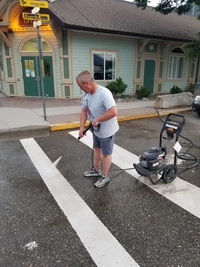 I have family, friends and colleagues in the 2SLGBTQ+ community. They are our neighbours. This is a small thing to do in support and to create awareness, said Sgt. Davis.

Sgt. Davis reached out to Kumsheen High School and obtained the support of the principal. The high school agreed to pay for the paint. 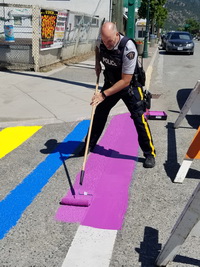 Though Sgt. Davis did the prep work on the chosen crosswalk by power washing and readying it for painting, the kids from Kumsheen High School did much of the painting. On June 17 and 18, officers from the Lytton RCMP helped students paint the rainbow crosswalk. 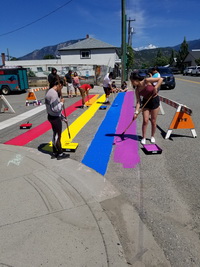 Sgt. Davis says that community support for the crosswalk has been overwhelming and a very positive experience.

This act of standing together on behalf of the 2SLGBTQ+ shows the compassion that exists in the Village of Lytton.