Surrey RCMP is requesting help from the public to identify a suspect in an unprovoked assault with a weapon in Newton.

Shortly before 6:00 p.m. on April 16, 2021, Surrey RCMP responded to an assault that occurred in the green belt near 133 Street and 66 Avenue. At approximately, 5:45 p.m. the victim, a 65-year-old man, was walking his dogs when an unknown man approached him on a bicycle, dismounted and began striking at him with a weapon. The victim was able to avoid the man’s strikes and sustained only a minor injury to his hand. The suspect then returned to his bicycle and left the area prior to police arrival.

A witness to the assault was able to take a photo of the suspect fleeing towards 132 Street. That photo is now being released to the public to help advance the investigation. 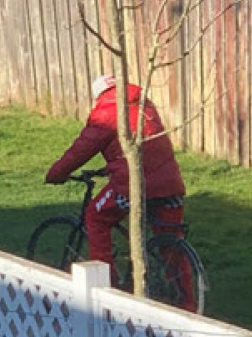 Anyone with more information is asked to contact the Surrey RCMP at 604-599-0502. If you wish to make an anonymous report please contact Crime Stoppers at 1-800-222-TIPS or www.solvecrime.ca.