In eight years since it was introduced, the British Columbia Fugitive Return Program continues prove itself to be very effective in making BC communities safer.

This July, the Fugitive Return Program returned its 200th fugitive to Calgary, Alberta, and now has officially returned 207 wanted fugitives. 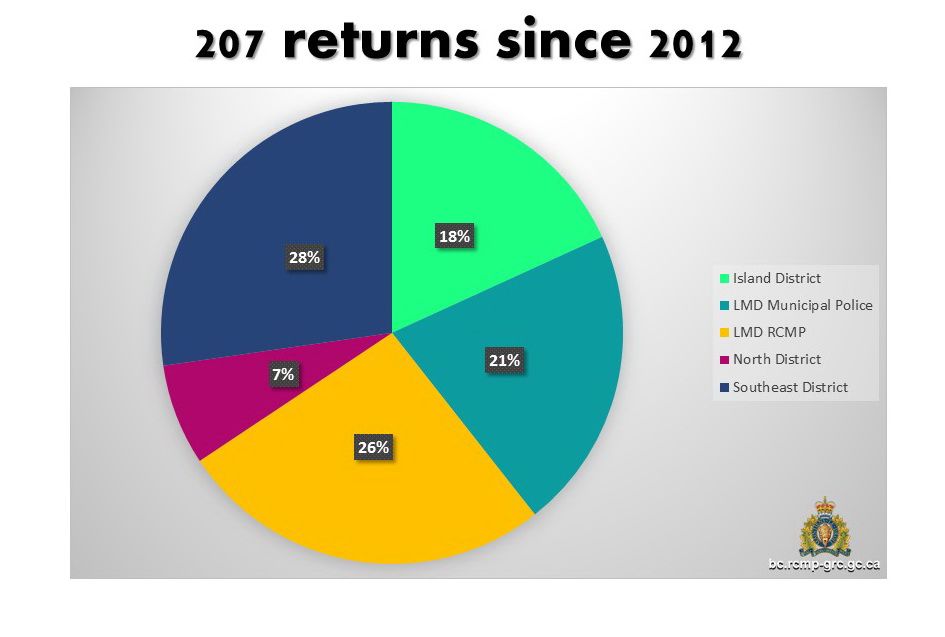 While the first fugitive returned was in 2012 back to Nova Scotia, wanted individuals with outstanding warrants for their arrest have been returned from British Columbia to six provinces and two territories. 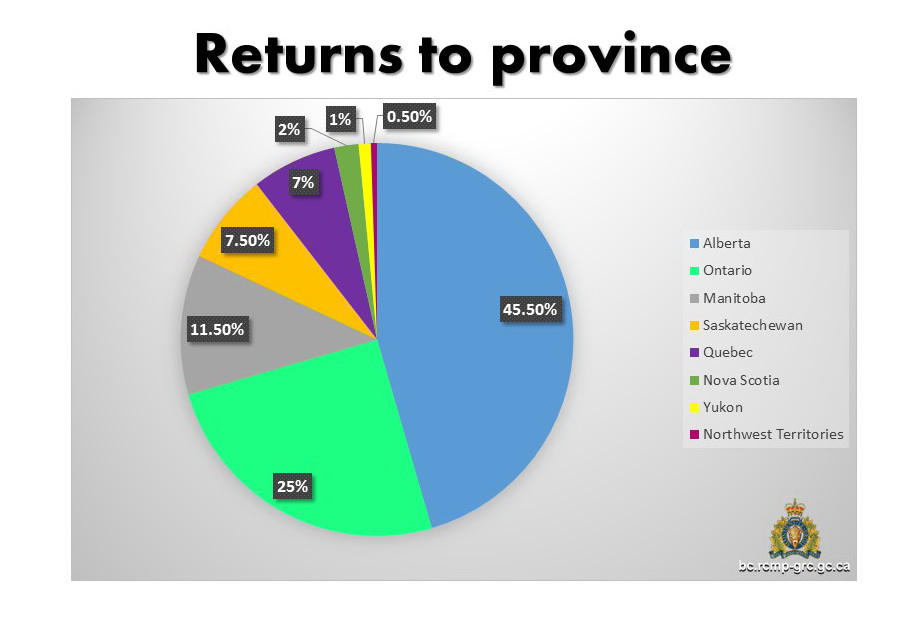 Returnees faced warrants for a wide-range of serious offences that including, but not limited to, assaults, frauds and thefts, robberies and drug related crimes.

We want people to know that British Columbia is by no means a safe haven for criminals, said Chief Superintendent Manny Mann, the Officer in Charge of the E Division RCMP Major Crime Section. The Fugitive Return Program sends wanted criminals who think they can evade the consequences of their actions back to where they committed those crimes so that they can be held accountable.

The Fugitive Return Program isn’t just right the thing to do to ensure accountability for crimes, it has protected the B.C. public from 200 wanted fugitives while sending a clear message to other criminals that B.C. is not a hideout, said Mike Farnworth, Minister of Public Safety and Solicitor General. I’d like to thank police agencies throughout B.C. for their referrals to the program and those working within the program—your combined efforts to identify, vet and remove dangerous fugitives from our midst continues to make our communities and families safer.

The provincial Fugitive Return Program, the first of its kind in Canada, is part of the provincial government's commitment to public safety. It is a partnership between the police, government, Crown counsel, and the BC Sheriff Service. The program takes wanted criminals out of BC communities and holds them accountable for their crimes. The provincial government has invested nearly $300, 000 through the Civil Forfeiture Office into this program, returning fugitives, with warrants for various serious crimes, to the province where the offence was committed. 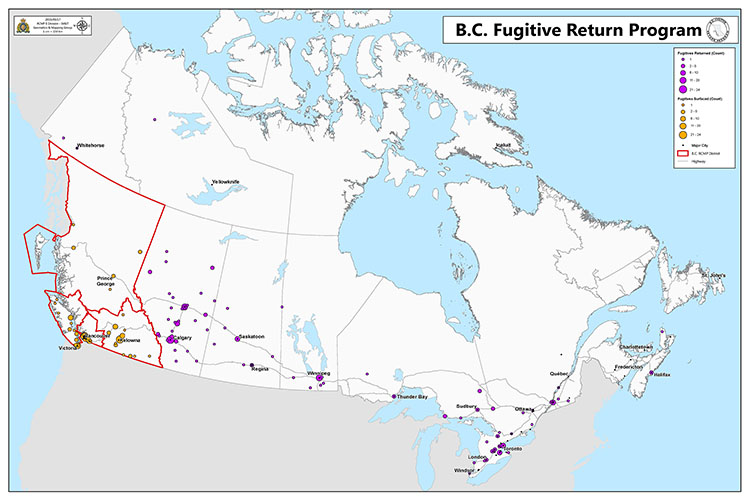 I am Chief Superintendent Manny Mann, the Officer in Charge of the E Division RCMP Major Crime Section, which oversees the BC Fugitive Return Program.

Since its inception in 2012, the B.C. Fugitive Return Program has proven to be a successful and valuable tool for law enforcement in communities across the province.

In July of this year the program returned its 200th fugitive, who was returned to Alberta.

To date, 207 individuals with outstanding warrants for their arrest have been returned from British Columbia to the provinces in which those individuals committed offences.

We are appreciative of the partnership between the police, Crown counsel, BC Sheriff Service, as well as the provincial government & Civil Forfeiture Office.

By establishing this relationship we have been able to return wanted criminals back to where they committed crimes so that they can be held accountable.

We also hope this brings some closure to their victims no matter where the crime was committed.

We want people to know that BC is by no means a safe haven for criminals and that we are dedicated to ensuring that our communities remain safe.

I would like to turn the floor over to Staff Sergeant Sean McGowan who oversees the B.C. Fugitive Return Program to highlight some our successes.

I am Staff Sergeant Sean McGowan, I oversee the Fugitive Return Program and I would like to take the opportunity to highlight a few significant returns since the program was launched.

Here is a first example. There was a man living in Kelowna who was identified by police as being involved in the human trafficking of underage girls. He had various warrants for his arrest from Montreal. When it was discovered he relocated to Vancouver with one of his victims from Montreal he was arrested in Vancouver and subsequently returned to Quebec by BC Sheriff Service transport.

Another one of note was the return of a father/son duo who were wanted for committing a fraud of nearly $50 thousand dollars in the Hamilton area against an 89-year old man and his wife, who suffered from dementia. When it was discovered they were living in the Lower Mainland, a joint arrest was made by the Surrey RCMP and the two were subsequently escorted back to Ontario.

As well, during a traffic stop in Vancouver, a male associated to a gang was identified from Saskatchewan as being wanted in Saskatoon for a number of offences, some of which included assault with a weapon, possession of a weapon for a dangerous purpose, use of an imitation firearm and discharge of a firearm. He was accused of forcing his way into the home of a young female victim and assaulting her. As a result of the assault, she sustained serious injuries. The male was subsequently arrested in Vancouver and sent back to Saskatchewan.